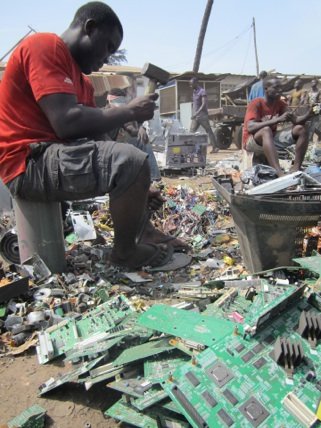 Every year, between 20–50 million tonnes of e waste (electronic waste) are generated worldwide. A large volume of second-hand and condemned electronic goods arrive in developing countries from the “developed” world, with a significant volume arriving as e-waste, exported illegally as “second hand goods”.

Without dialogue or narration, E-WASTELAND presents a visual portrait of unregulated e-waste recycling in Ghana, West Africa, where 200,000 tonnes of second-hand and condemned electrical goods arrive each year.  It has created a situation where electronics are not seen for what they once were, but rather for what they have become.

The film is set entirely at the Agbogbloshie slum in the capital Accra. Situated on the banks of the highly polluted Korle Lagoon, Agbogbloshie is home to over 30,000 settlers, mainly from the poorer Northern regions of Ghana. It is also home to the largest e-waste dump site in Africa. Generally uneducated and with few employable skills, many of the settlers at Agbogbloshie are forced to make a small living salvaging and recycling e-waste.