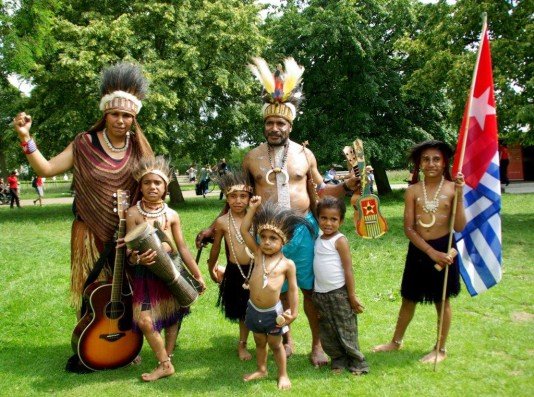 The Lani Singers hail from the remote central highland region of West Papua on the island of New Guinea in the south-west Pacific. Deeply emotive, their songs are rooted in the sacred rituals of the Lani tribe, whose way of living has remained largely unchanged for hundreds of years. Their music also embodies a powerful modern day message of their peoples struggle for a free West Papua.

What is most remarkable about the Lani Singers is the story of how they came to be where they are today; from leading a simple, subsistence life in the highland region of West Papua, to their present home in exile in the UK. Greater still is the responsibility that rests on their shoulders – sustaining the traditions of West Papuan music that are threatened by the occupying regime of Indonesia.

The Lani Singers are husband and wife, Benny and Maria Wenda. In young adulthood Benny was made leader of the Koteka Tribal Assembly, with the responsibility for all the tribes within the highlands of West Papua. Fearing the influence that he held amongst the indigenous population, the Indonesian regime put him on trial in 2001 with the prospect of a 25 year prison term. His crime was to peacefully raise the banned national flag of West Papua and to call for the cultural heritage of West Papua to be respected. Displays of cultural expression including playing traditional music are banned by the Indonesian government – just one example of what many observers have described as ’cultural genocide’, adding to the human one that has already cost the lives of over 500,000 West Papuans. While Benny languished in prison, sustained threats and intimidation were made towards his wife Maria, and she was forced to flee with their five month old daughter Koteka to neighbouring Papua New Guinea, to one of the many refugee camps that lace the border region. It was here that Maria started writing music.

Benny escaped from prison during his trial, and fled through the jungle to Papua New Guinea where he was reunited with Maria and Koteka. Powerless to instigate change for their country from a refugee camp, the family were helped by an NGO group, who in 2003 brought them to the UK where they were granted political asylum and now spread the message of the ongoing struggle for a free West Papua.

Recorded over a two year period, the collection of songs that make up their debut album Ninalik Ndawi (Freedom Song), reflect the remarkable journey that the Lani Singers have made. Steeped in the rich traditions of Lani music but also embodying a powerful modern message, these songs encompass the purest emotions of love, pain, joy and hope. They ensure a lasting legacy for a people whose future appears more perilous now than at any time in history.